Before you use these materials why not check out or podcast for learners and teachers alike, it’s called 2Ts in a Pod, follow the link below to listen:

This is a list of 78 expressions from key word transformations in the CAE exam. The expressions are taken from the fantastic quizlet set that someone made. Have students study 10-15 of the expressions for homework and the use the quizlet set to test them in class; great for intensive preparation courses when you’re pressed for time. Download the handout below:

Study the expressions carefully, focus on the prepositions and patterns (gerund/infinitive etc.) 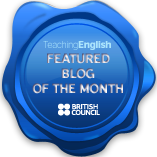