A quick shoutout to my friend Paul O’Brien from U-Speak who’s looking for professional, committed autónomo English teachers to get involved in this exciting new language centre.

At “U-Speak” we provide a comfortable and supportive environment where students can develop their English level through speaking.

We are looking for teachers with their own students who would like to have a comfortable and convenient location for their classes.

You can check out our location at: www.uspeak.eu

Saw these on the British Council Facebook page yesterday, definitely going to try them out.

I saw this great cheatsheet from the Global Digital Citizen Foundation on Facebook, could be useful for getting students thinking about issues, especially when planning essays and reports. 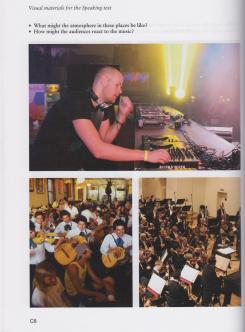 This is a task-based lesson plan to help CAE students complete part 2 of the speaking exam in which they must compare and contrast two of three pictures. Big thanks to my colleague Raquel Gomez for her help with the development of this lesson plan. You can download the student handout, pictures, teacher’s notes and audio files below:

Choose a set of part 2 pictures from your text book, put students in pairs and have them record themselves comparing two of the pictures for a minute. Give students no guidance as to the language they should use. While they are doing this, monitor them and make a note of the structures they are using.

Now have students listen back to their recording in pairs and evaluate it. This is likely to make them a little uncomfortable, no one likes the sound of their own voice recorded, but tell them to go for it.

Follow the exercises below, which are focused on improving students’ performance in this task.

Project “CAE part 2 pictures” onto the board. Have “CAE Speaking part 2 audio” ready to play.

Listen to the candidate talking completing part 2 and answer the questions:

Play audio through once and have sts answer in pairs.

Listen again and complete the text.

Play audio through once, then again, stopping after each gap to check understanding.

In the first picture at the bottom we can see a couple who seem to be camping. Maybe up a mountain, they seem to have a camp fire and their tent set up and I think they’re roasting marshmallows. They definitely seem to be having a good time. They might have been walking all day and then they’ve finally finished and set up their tent, now they’re sitting down to enjoy some nice hot food.

In contrast, in the other photo we can see a man who seems to be working. I think he’s a builder, it looks as if he’s helping to build a house. His feelings are probably quite different to the couple in the other photo because he’s at work obviously so it’s probably nowhere near as enjoyable as the activity the other couple are doing.

But maybe working outside isn’t as bad as working in an office so he might be happy about that. For me personally, I’d rather be with the couple here camping on the mountain than at work definitely.

Play audio of individual sentences; have sts practice repeating them in pairs.

Now students attempt the task again, recording themselves a second time. Again monitor and make a note of the structures. Then have students compare their two attempts. Board all of the language from the two attempts and encourage students to notice the changes.

This is a powerpoint designed for use with exam classes to encourage students to complete pair-work in English and thus develop the language of negotiating, agreeing and collaborating. Download it below:

You can use this resource in a number of ways; you can project the slide onto the board for students to refer to while completing pair-work. Alternatively, you could print the main slide out, laminate it and distribute one copy to each pair for the duration of the class. Each pair could then be given a board pen in order to keep track of how many of the expressions they have used during the class, the pair who use the most could then be awarded a prize at the end of the class.

This is a new lesson plan for B2+ learners in which students practice reported speech by interpreting emojis and text messages from the popular messaging app Whatsapp. Everything you need is in the powerpoint below:

Students start by reporting the meaning behind various emojis then build up to reporting a section of a text message conversation and then move on to translating and reporting their own text conversations from their phone. It provides great practice of the grammar point as well as opportunities for the emergence of real, useful language in an everyday setting.

We want to base the sessions on your needs so if you’re interested in attending it would be great if you could complete the surveymonkey below so we can get an idea of what to focus on and also the time-slot that suits you best.