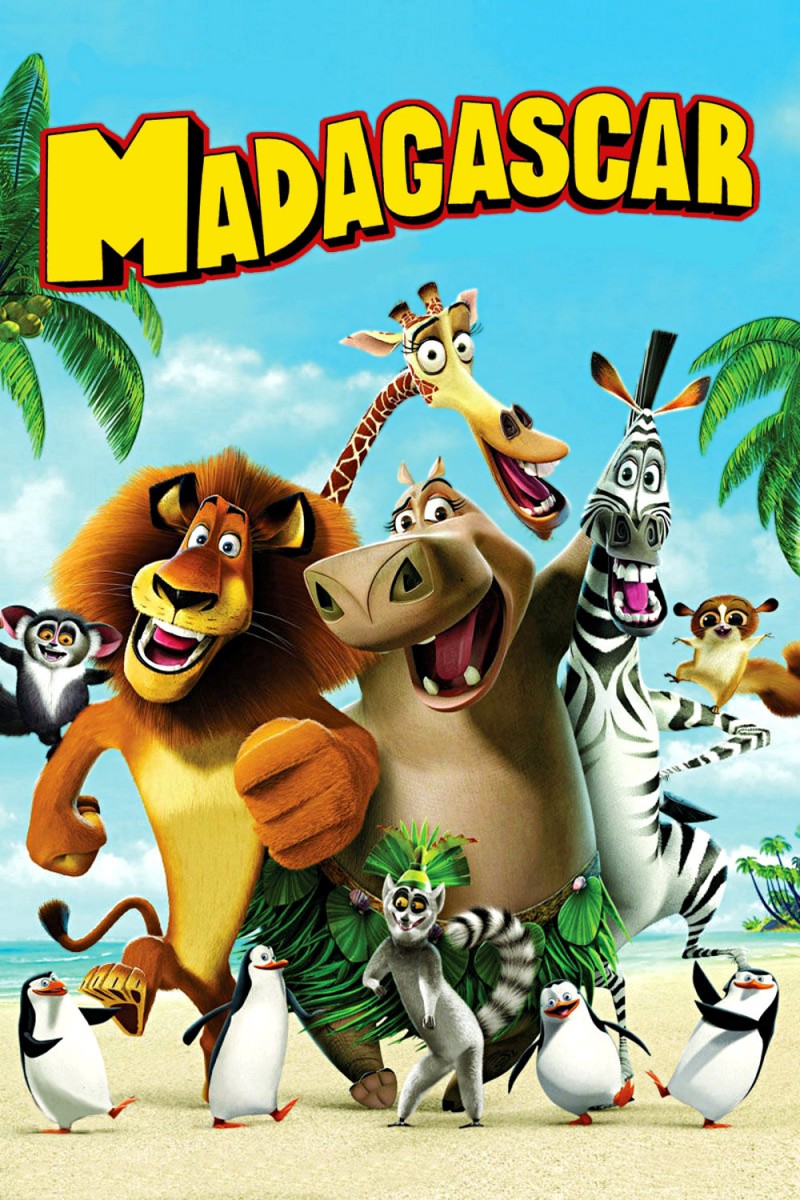 This is a reading and vocabulary lesson plan for higher level students based around an example of a holiday diary. It works well as a model for CPE article tasks about travelling. Download the power point and handout below:

Show the power point and have students discuss the questions as a warmer.

Give out the handout and have students complete the exercises.

Encourage students to write a similar holiday diary for homework.

What do you know about Madagascar? Have you ever been there? Would you like to?

Read the text and tell your partner is this type if holiday would be your cup of tea.

We’re quite adventurous so your standard beach holiday doesn’t really cut it for us so after umming and ahhing for a few months we finally settled on a trip to Madagascar. We had set our sights on exploring the dense undergrowth of Madagascar’s jungles and maybe catching a glimpse of some of its famed wildlife.

We flew into the capital Antananarivo, no sooner had we stepped off the plane than we were hit by a wave of intense heat, Madagascar has a really humid climate so the sweat was pouring down our faces in no time at all. Antananarivo is bustling with life with a mindboggling network of haphazard back streets in which you can lose yourself in the blink of an eye. Apart from the hotel we’d booked online we’d decided to play it by ear for the rest of the trip so we set about looking for a guide to take us into the lush vegetation of the surrounding rainforests. Unfortunately there was a mix-up with our luggage that set us back 2 hours but eventually we picked up our suitcases and set off on our mission.

As a city, Antananarivo isn’t much to write home about, it’s pretty grimy and run-down and our taxi ride into the city centre was pretty fraught. When we finally arrived at our hotel it looked a sorry sight, not what we’d been led to believe in the brochure. However, we’re not really big on creature comforts so we didn’t mind. Luckily, the hotel organised guided-tours of the rainforest and there was one leaving the very next day.

We were up at the crack of dawn the next day to board the rickety old minibus that was going to take us out into the middle of nowhere to begin our adventure. The bus journey was a little bit hairy as the road was little more than a track with potholes everywhere. We gradually wound our way up through the mountainous landscape which surrounds the city until we reached the summit of one of the foothills where we stopped for a picnic. The views of the rainforest stretching out in front of us were a real sight to behold, never before have I seen such an awe-inspiring sight…

Read the text again and decide if these statements are true of false.

Look at the expressions in bold, discuss their meaning with a partner.

Look at the expressions again and try to categorise them.

What can you remember? Work with a partner.

Cover the text and try to retell the story using as much of the vocabulary as you can.

Have you ever had a similar experience? Tell your partner about it using the vocabulary. 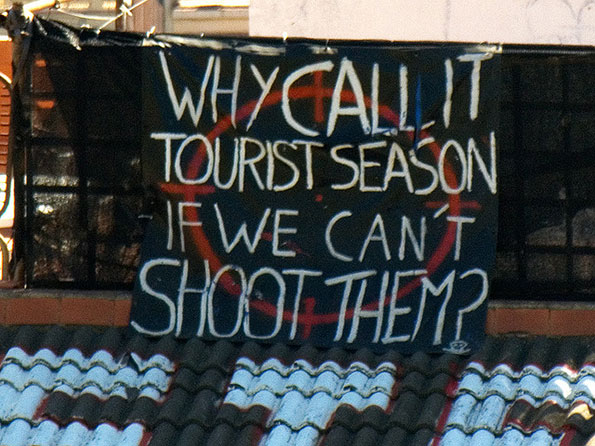 This is a lesson plan based around an article from the Guardian newspaper about an anti-tourism march that took place in Barcelona last year. Download the lesson plan, key and power point below:

Project the power point and have students try to guess what the text they’re going to read is about by flashing up the picture and the keywords 2 at a time. Students continue predicting until all the key words are visible.

Go through the activities on the hand out, answer key for comprehension questions is at the bottom.

Behind banners reading “Barcelona is not for sale” and “We will not be driven out”, some 2,000 people staged an “occupation” of the Rambla, the city’s famed boulevard, on Saturday.

The protest was organised by a coalition of more than 40 resident and community groups from all over the city, not just the neighbourhoods most directly affected by mass tourism.

Visitor numbers have grown exponentially in recent years. In 2016 an estimated 9 million people stayed in hotels and a further 9 million in holiday apartments. In addition, the city received around 12 million day-trippers arriving by car and train or on cruise ships.

Tourists looked on bemused as the banners were unfurled at the top of the Rambla, beside the Canaletes fountain.

“I don’t understand. What do they mean, Barcelona is not for sale?” asked Qais from Kuwait. “It’s not what we were expecting, but I can see their point,” he said when it had been explained to him. He added: “Things are really bad in the Middle East,” which put things in perspective. “Does it mean they don’t want us here?” his wife asked. Birgid from Denmark was less sympathetic. “Tourism brings in lots of money to the city, doesn’t it? I’m sure it’s changed the city, but that’s life, isn’t it?”

Roger from Wigan, here on his second visit, commented: “I can understand it, the place is very commercial. And if I understand what’s written on some of these placards, they are complaining that tourism is forcing their rents up. I can sympathise with that.”

This was one of the key issues behind the march, as the money to be made from holiday lets is forcing rents up and driving people out of the city.

Christine, an Englishwoman on the march who has lived in Barcelona for more than 20 years, said: “We’ve been renting our flat in the old town for 17 years. In that time I reckon we’ve paid around €150,000 in rent. Now they want to kick us out because they can make more money renting it out to tourists.”

The march coincides with a new law passed by Barcelona city council on Friday that, for the first time, seeks to curb tourism. The special urban plan for tourist accommodation aims to limit the number of beds on offer from hotels and apartments by imposing a moratorium on building new hotels. No new licences will be issued for tourist apartments.

There are currently 75,000 hotel beds in the city and around 100,000 beds in tourist flats, at least half of them unlicensed and illegal. The city is at loggerheads with Airbnb, the principal letting agency. Last year the council fined Airbnb and HomeAway €600,000 each for advertising unlicensed apartments.

Airbnb argues that the overwhelming majority of its clients in the city are people who are letting out rooms as a way of making ends meet during Spain’s prolonged financial crisis.

“That may be true up to a point, but it masks the real problem, which is speculation,” says Daniel Pardo, a member of the Neighbourhood Assembly for Sustainable Tourism. Yet people are free to visit the city, so what’s to stop them?

“One thing we could do is stop spending millions on promoting tourism,” says Pardo. “We’re subsidising tourism with public money, by exploiting workers in the service economy and exploiting the infrastructure of the city, which we citizens pay for. Furthermore, tourism is distorting the economy and there is little support for anyone who wants to establish non-tourist enterprises.”

The good-humoured march moved to the seaward end of the Rambla, where one of the organisers read out a manifesto calling for more local shops, more homes, rather than businesses, and control of the pollution caused by private cars and cruise ships. “It’s a great turnout,” one of the marchers quipped. “There are more people here than at Trump’s inauguration. The citizens have never been consulted about this, although they’re the ones who suffer the consequences and aren’t enjoying the benefits. [We’re asking for] the debate to be opened to everyone and that we reach some other resolution of the problem, instead of the present one based on continuous growth.”

Work with a partner, look at the underlined expressions in the text, what do you think they mean?

Now try to complete the expressions from memory:

Complete the sentences with one word to make expressions of opinion.

Look at the language from the text, in what other contexts could you use it?

Saw this on twitter shared by Andy Tharby‏ @atharby could be useful for CPE students for Proficiency writing part 1.

Before you use these materials… We’ve created a new podcast aimed at B2+ level English students and teachers alike. You can listen for free at our SoundCloud page below. You can download teacher’s notes to accompany them from our Facebook page or from this blog. All comments and feedback welcome! Give us a like and a share 😉
https://www.facebook.com/2tspodcast/

This is a phrase sheet and writing task for CAE/CPE students designed to help them tackle formal letter of complaint tasks. Download the handout below:

You recently stayed at one of a chain of large hotels and encountered a number of problems during your stay. Write a letter to the company’s head office detailing the problems you had, describing what happened when you complained to the hotel staff and suggesting ways the company could improve its service. (CAE 220-260 words – CPE 280-320 words)

I’ve recently started teaching CPE again so I decided to make a phrase sheet for my students to help them tackle part 1 of the writing paper, the formal essay. Download it below:

This is a powerpoint designed for use with exam classes to encourage students to complete pair-work in English and thus develop the language of negotiating, agreeing and collaborating. Download it below:

You can use this resource in a number of ways; you can project the slide onto the board for students to refer to while completing pair-work. Alternatively, you could print the main slide out, laminate it and distribute one copy to each pair for the duration of the class. Each pair could then be given a board pen in order to keep track of how many of the expressions they have used during the class, the pair who use the most could then be awarded a prize at the end of the class.

We want to base the sessions on your needs so if you’re interested in attending it would be great if you could complete the surveymonkey below so we can get an idea of what to focus on and also the time-slot that suits you best.